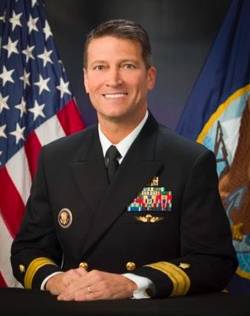 Doctor Ronny Jackson is a Rear Admiral in the United States Navy and currently assigned to the White House, where he serves as Assistant to the President and as the appointed Chief Medical Advisor. A native of Levelland Texas, Doctor Jackson completed his undergraduate training at Texas A&M University, where he majored in Marine Biology. He then attended medical school at the University of Texas Medical Branch, graduating in 1995.

He began his active duty naval service in 1995 at the Portsmouth Naval Medical Center in Virginia. After completing his first year of residency training and finishing number one in his class, he went on to become the Honor Graduate of the Navy’s Undersea Medical Officer Program in Groton, Connecticut. Uniquely qualified in hyperbaric and submarine medicine, his subsequent operational naval assignments have included serving as the Diving Medical Officer with Explosive Ordnance Disposal, Special Operations, Naval Special Warfare, and Navy Salvage Diving teams, stationed in Portsmouth VA, Groton CT, Panama City FL, Norfolk VA, and Sigonella, Italy.

In 2001, Doctor Jackson returned to the Naval Medical Center at Portsmouth to complete his residency in Emergency Medicine, finishing at the top of his class and receiving the Honor Graduate designation. Upon completing his residency in 2004, he was assigned as clinical faculty in the Emergency Medicine Residency Program. In 2005 he joined the 2nd Marines, Combat Logistics Regiment 25, in Camp Lejeune, North Carolina. From there he deployed in support of Operation Iraqi Freedom as the Emergency Medicine Physician in charge of Resuscitative Medicine for a forward deployed Surgical Shock Trauma Platoon in Taqaddum, Iraq.

Doctor Jackson is a board certified diplomate of the American Board of Emergency Medicine and is designated as a Fellow of the American Academy of Emergency Medicine. He is a Clinical Associate Professor in the School of Medicine at the Uniformed Services University of the Health Sciencess, an Adjunct Faculty member in the Harvard School of Medicine Associated Disaster Medicine Fellowship at the Beth Israel Deaconess Medical Center, and a Fellow in the Faculty of Sports and Exercise Medicine, Royal College of Surgeons in Ireland. Doctor Jackson also holds a Presidential Appointment to the United States Naval Academy Board of Visitors.

He says of SPC, "I continue to tell people I meet who ask me about my story, that SPC is what put me on the path to success. I received an outstanding education there that really laid the foundation I needed to build a successful and rewarding career. You will not find a better investment on your educational dollar than that offered by South Plains College"