LEVELLAND – If you’ve ever had a conversation with a nurse, the message you take with you is that nursing is a calling. It takes a special kind of person. After a hospital stay in 1986, Mae Beth Collins found her calling thanks to the wonderful care she received as a patient. She was so impressed with the level of care she received and she knew instantly that she wanted to become a nurse.

Mrs. Collins returned to the classroom at South Plains College where she earned her certificate as a licensed vocational nurse in fall 1986. She went to work for Texas Tech University Health Sciences Center in the pediatric clinic. She met Dr. Doug Klepper who was completing his residency. He asked her to come to work for him at his practice in Medical Office Plaza as a pediatric nurse and she accepted the offer.

For the next 30 years, they worked together to build one of the best pediatric clinics in the city of Lubbock. During her last two years, Dr. Klepper loaned Mrs. Collins to Dr. Ben Wolcott to help him build his practice. Mrs. Collins passed away unexpectedly on Jan. 11.

The story of Mae Beth began when she graduated from Lamesa High School in May 1977. She enrolled in South Plains College to study fashion merchandising. In her first fall semester at SPC, she met the man who would become her husband after a chance encounter at the United Supermarket parking lot. His name is Mike Collins, a senior at Levelland High School.

“Back in the old days, United Supermarket lot was the drag,” he said. “If you didn’t have any gas you parked and everybody else drove around. She came driving by and I said to her, ‘hey don’t I know you from somewhere?’ 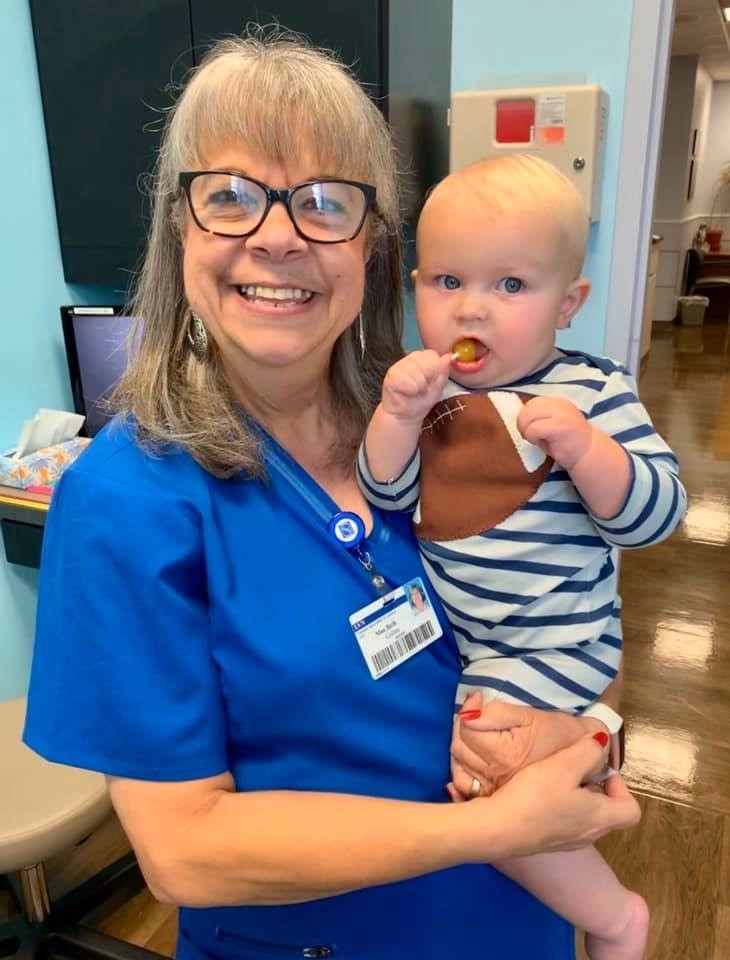 “She said no and kept driving,” he said. “I didn’t give up and finally asked her out on a date to our five star restaurant here in Levelland, Pizza Hut, and from that day forward we were never apart.”

Mr. Collins said they did not go through the engagement to marriage to wedding stages like most couples. Instead, their union evolved. They knew when they were ready to get married.

“I graduated in February and I told my parents that I wasn’t going to college – I was going to marry Mae Beth,” he said. “My father said he had $5,000 that he had put aside for college. He gave me $2,500 and I came over to Lubbock where I purchased a mobile home. She moved from her dorm into the mobile home with a girlfriend.”

The couple wed in April and spent the next 41 years as husband and wife. They had two daughters, Kendra on May 9, 1981 and Myka on Dec. 20, 1983. During the last 10 years, the couple travelled to San Francisco, Alaska, New Orleans, Niagara Falls, Chicago and Las Vegas, Mrs. Collins’ favorite site.

“She was an exceptional wife, mom, nana, friend and an outstanding pediatric nurse.” Mr. Collins said. “It was her true calling in life and she never considered it a job. She considered it her passion. She loved all of her patients and they loved her.”

The Collins Family wants to honor Mrs. Collins’ memory by raising money to fund the Mae Beth Collins Memorial Scholarship. The scholarship will be used to assist a SPC student in the nursing program. The family is establishing the scholarship and encouraging others to join them and donate using the link https://southplainscollege.ejoinme.org/. Checks can be sent to South Plains College, Office of Development and Alumni Relations, 1401 S. College Avenue, Levelland, Texas 79336 in the name of their daughter, Kendra Lane.

“We want to bless another individual who has the desire to care and love others as Mae Beth did for all of those she came into contact with and provided care,” Mr. Collins said.

For more information about ways to support scholarships and students at South Plains College, contact Julie Gerstenberger, director of development and alumni relations, at (806) 716-2020.