LEVELLAND – The President's Student of the Year is the highest recognition a student can receive at South Plains College. The award was presented Friday (May 13) during the 64th Annual Commencement Ceremony in the Texan Dome.

This award honors an outstanding student who has been most successful academically and socially while making significant contributions to the campus environment.

Elizabeth Rhoads has been chosen as this year’s recipient. She is a member of Phi Theta Kappa International Honor Society and the Criminal Justice Club. Her major is criminal justice. She was nominated for the award by John Barnes, assistant professor of law enforcement and academy coordinator. 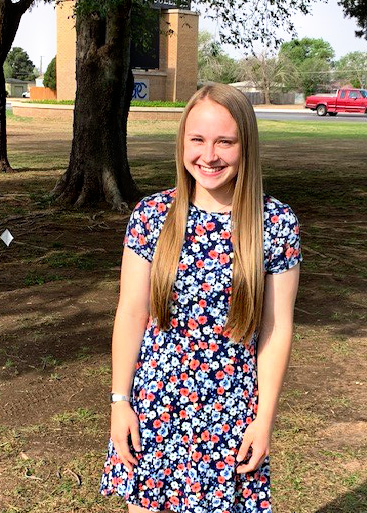 According to Barnes, "Elizabeth is an outstanding student, and she never missed classes. I’ve had her for the last two semesters, and she has spoken to me about her career goals and how to obtain them.

"I told her that her academics will help her achieve all of her goals," he said. "Since she joined the Criminal Justice Club, I’ve seen her come out of her shell and make a lot of friends. She takes time off from her job to help the club with events. She has a bright demeanor and a great work ethic. I’m blessed SPC has been a part of her academic success."

Rhoads is the recipient of multiple scholarships, including the SPC Founders Opportunity Scholarship, the HEERF III ARP Grant, and the Chick-Fil-A Leadership Scholarship.

Rhoads was home schooled throughout her education at CrossRhoads Academy, the family’s school name. She completed several dual credit courses at South Plains College before enrolling full time. She said she considers her grandfather, David Boswell, to be a great influence in her desire to become a police officer. He worked as a highway patrolman and a narcotics investigator during his career.

"He lived and worked all over Texas, and he has told me fascinating stories about his job," she said.

The stories Boswell shared piqued her interest and motivated her to study Criminal Justice. Since being in the program, Rhoads was able to visit the Lubbock County Jail where she observed the operations within the correction system.

"My goal is to one day become either an investigator or work with a police-trained canine,” she said.

She said she will attend a police academy after earning her bachelor’s degree. And, while she would like to live near Lubbock, Rhoads said she is open to going wherever the opportunities are available – as long as it’s in Texas.

Rhoads is the daughter of Kevin and Tina Rhoads, both of Lubbock. She has three older siblings: Mikala (Jacob) Backus, Aaron Rhoads, and Hannah (Jacob) Mulkey, all of Lubbock. After graduation, she plans to attend West Texas A&M University, where she will pursue a bachelor’s degree in Criminal Justice.